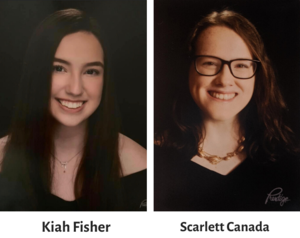 Kiah Fisher is the valedictorian of the Cheatham County Central High School Class of 2020.

During her time at CCCHS, she was involved in several extra-curricular activities such as being a member of the Student Council, Beta Club, Cubs for Christ and HOSA.

She donated over 100 hours of community service and volunteer hours throughout her four-year tenure at CCCHS. Additionally, she served as a school representative for the Board of Education, speaker for the inaugural State of the District breakfast, and was accepted into the Clinical Internship program.

Fisher’s top accomplishments were being elected as a state officer for Tennessee HOSA. She served as the state’s Reporter/Historian during 2019-2020 and being selected to speak at the 2019 State of the District breakfast.

If she had to choose a prominent memory, it would be one of her speaking opportunities. High school gave Fisher the chance to speak at special program days at school, HOSA conferences, events with the Cheatham County Board of Education, post-secondary summer programs and graduations.

She plans to attend Lipscomb University. As of now, she is not completely set on a major or specific pathway. She wants to be able to have an open mind when it comes to her future.

Scarlett Canada is the salutatorian of the Cheatham County Central High School Class of 2020.

During her time at CCCHS, she was involved in the Marching Cubs and theatre, performing in a number of plays, including All Shook Up, The Curious Savage and Little Shop of Horrors. She also spoke at the Cheatham County School District’s 2020 State of the District breakfast.

Her top accomplishments included being cast as the title character for The Curious Savage and getting second in finals at the Huntington Marching Band Competition.

Her favorite high school memory was performing in the Lip Sync competition for the first time and receiving first place.

She plans to attend the University of Tennessee at Knoxville to study English and teach English as a Foreign Language. She has also been accepted into the Honors Society at UTK.