Principal, Supervisor of the Year named 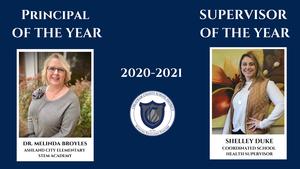 The Cheatham County School District is proud to announce that Dr. Melinda Broyles has been named the district’s Principal of the Year and Shelley Duke is the Supervisor of the Year.

Broyles, the principal at Ashland City Elementary STEM Academy, has been in education for 20 years and joined the district in 2015. She was appointed ACESA principal in 2018.

She has taught middle and high school math and has served in a number of administrative roles during her career. In Cheatham County, she was the assistant principal at ACESA and Riverside Academy for two years and district attendance supervisor for two years.

Broyles was an inaugural member of the Tennessee Rural Principals Network, has served as an Innovative Leaders Fellow and is a graduate of the National Institute of School Leadership. She has also served as an adjunct professor at Union University.

Duke, a graduate of Sycamore High School, joined the district in 2010 as the Coordinated School Health Supervisor.

Over the past 10 years, she has assumed the additional duties of overseeing the school nurses and developed our very successful SRO program and, of course, now all things COVID-19.

Her job involves the whole child and working to remove the non-academic barriers to learning for students.

In 2015, she received state recognition for excellence in the healthy school environment for the efforts in our district.

Broyles and Duke will now move on to the regional-level competition in their respective categories.