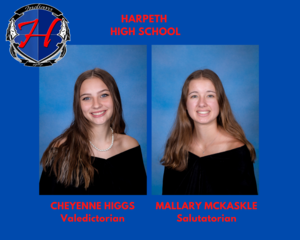 Cheyenne Higgs is the valedictorian of the Harpeth High School Class of 2022.

During her time at HHS, she played both soccer and softball for four years. She served as a co-captain of the soccer team and was named to the All-Tournament soccer team for three consecutive years. She also was a member of the National Honor Society for three years and served as the public relations officer for one year.

Her favorite memories were winning regionals in soccer her sophomore year and going to prom with her friends.

Higgs plans to attend the University of Tennessee in Chattanooga and major in chemistry.

Mallary McKaskle is the salutatorian of the Harpeth High School Class of 2022.

At HHS, she was a member of Fellowship of Christian Athletes, graduated from the Youth Leadership Cheatham County program, served as vice president of the National Honor Society and was class secretary.  She also represented HHS at the Tennessee School Boards Association’s annual SCOPE conference, and she’s a member of the White Bluff Church of Christ youth group.

McKaskle ran track and cross country and placed fourth at the state track meet with the 4×800-meter relay team her junior year.

Some of her favorite high school memories are hanging with her friends during senior week and running with her teammates at track and cross-country races.

She plans to attend Tennessee Tech University and major in mechanical engineering.