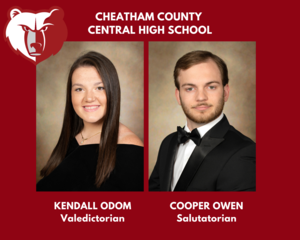 Kendall Odom is the valedictorian of the Cheatham County Central High School Class of 2022.

During her high school career, Odom has been a member of the HOSA Club, FFA Club, Beta Club and Best Buddies. She played volleyball all four years of high school, serving as a co-captain her senior year.

She will graduate with 17 college credit hours due to the dual enrollment classes that she has taken in high school. She has received the TVA Power Play Scholarship.

Her favorite high school memory is all of the friendships she has made along the way, as well as all of the sports games she has attended.

In the fall, she plans to attend Nashville State Community College, where she will start on the track of its occupational therapy program. She then plans to transfer to Western Kentucky University to further her studies. Her dream is to become an occupational therapist who works with special-needs kids.

Cooper Owen is the salutatorian of the Cheatham County Central High School Class of 2022.

While at CCCHS, Owen was involved with student government, Future Business Leaders of America, Beta Club, baseball and football. He received the Ralph Spangler Award and All-Region football honors. He represented CCCHS as the National Football Foundation’s student athlete of the year.

His favorite memory was beating rival Sycamore High School and returning the Powder Keg to CCCHS in his senior season.

Owen plans to attend Vanderbilt University in the fall and pursue a degree in economics with hopes of working in corporate strategy and development.