About CCSD » Education Hall of Fame 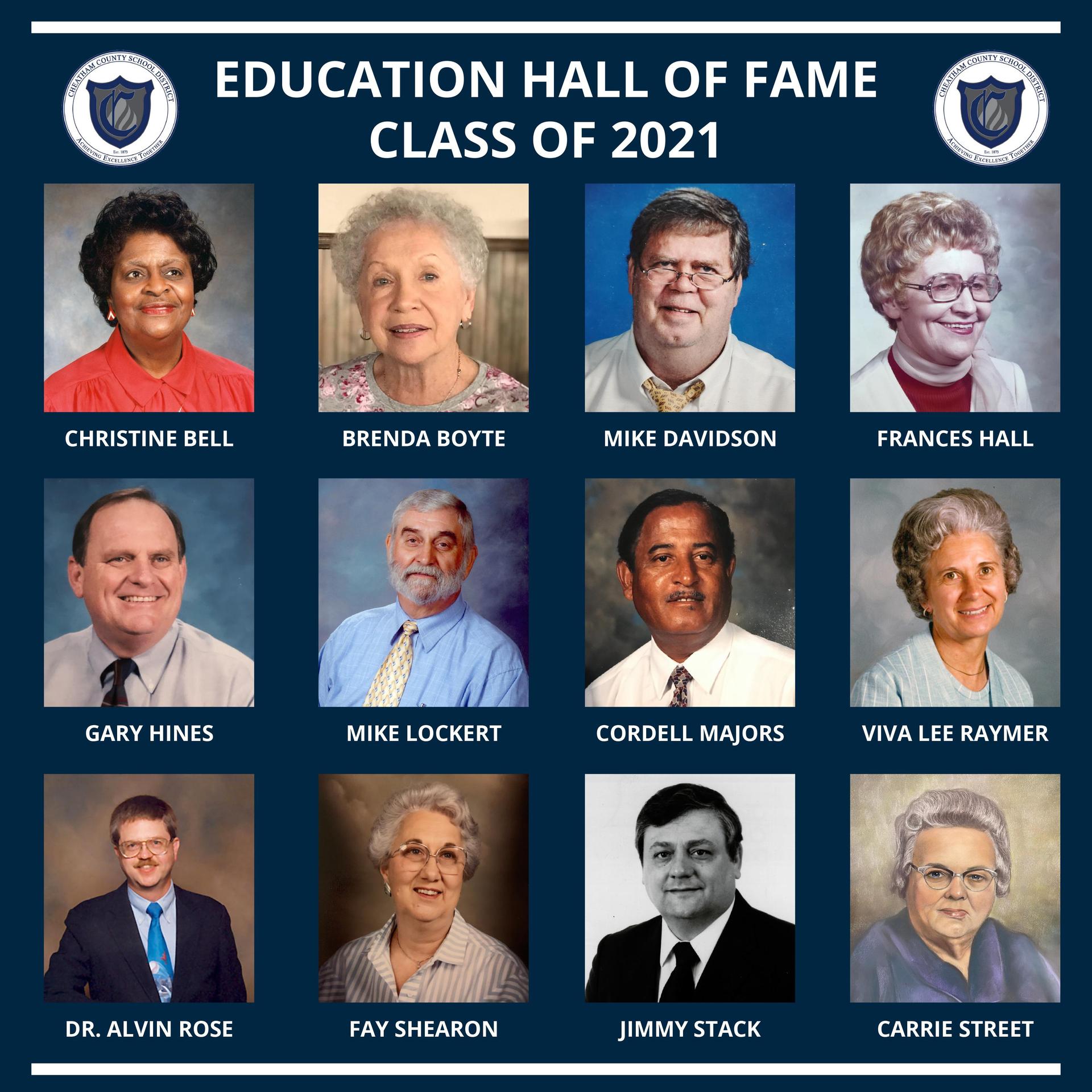 Twelve distinguished Cheatham County educators are being inducted into the inaugural class.

Members of the first class are (in alphabetical order):

Christine Bell: Christine Bell started her career in the Cheatham County School District in 1947 at Neptune School. She later taught at Fay Trice School and Bethel School. When Bethel School closed, she joined the staff at West Cheatham Elementary School when it opened in 1968. She taught first grade at WCES for 25 years until her retirement in 1993. Bell was a cherished elementary school teacher who deeply loved her students. She was always dressed up, with her hair done, lipstick on and ready to challenge each student every day. Her pleasant, unique voice brought the class into a story or the lesson of the hour. She was known to walk around the classroom with a wooden yard stick. Her students learned quickly that if the change in the tone of her voice didn’t get their attention, a lick across the palm from that golden yard stick would do the trick. She taught her students to love, to respect and to honor all people.

Brenda Boyte: Brenda Boyte started her career in the Cheatham County School District in 1962, teaching English at Cheatham County Central High School. During her 46-year career, she taught the first art class at CCCHS, evaluated and mentored teachers at CCCHS and set up the dual enrollment program for English and math to enable students to transfer credits to most colleges. Boyte attended Cheatham County Schools and she spent her entire career at CCCHS until her retirement in 2008. Boyte, known for her Advanced English classes, always demanded the best from her students. “Most” of her students appreciated her very high standards and expectations. She is one of the reasons that many CCCHS graduates have good grammar and a strong literature foundation. To this day, many of her former students proudly say that – hands down – Boyte was their favorite high school teacher.

Mike Davidson: Mike Davidson started his teaching career in Overton County in 1973. One year later, he joined the Cheatham County School District as a teacher and coach at Pegram Elementary School. After five years at PES, he moved to Harpeth Junior High School when it opened in 1979. At Harpeth, he taught middle school math and physical education. In 1998, he was named the assistant principal of Harpeth Middle School, a position he held until retiring in 2008. The HMS gymnasium is named in his honor. Mr. D, as he was called, was beloved by countless students for his incredible passion for teaching, his amazing sense of humor and a knack for storytelling and entertaining in his classroom that was simply unrivaled. Any student that had the privilege of experiencing Mr. D's class can tell you that while they certainly learned a great deal, they more importantly got to experience one of the most entertaining, hilarious, and joyful educators that the district has ever known.

Frances Hall: Frances Hall started her career with the Cheatham County School District in 1966 as an assistant at East Cheatham Elementary School. At age 42, Hall started college in 1967 – the same year her son became a freshman in college and her youngest daughter began first grade. After earning her degree, she began teaching at ECES in 1971 and later taught at both Sycamore Intermediate School and Ashland City Elementary School, where she retired in 2007. At the time of her retirement at age 83, she was the oldest working elementary school teacher in Tennessee. Her life was a blessing to the people of Cheatham County across many generations. She touched countless people through her storied teaching career and diligent service to the Lord. During her 41 years as an educator, she always made learning fun for her students and was known to even stand on top of her desk and dance for her students. She pulled out the best in her students and always wanted them to enjoy learning.

Gary Hines: Gary Hines started his career with the Cheatham County School District in 1967 as a teacher at Kingston Springs Elementary School and become the school’s principal six years later in 1974. When Harpeth Junior High School opened in 1979, he was named the school’s principal. When the junior high became a high school in 1985, Hines took over as principal – a position he held until he retired in 1999. At the time of his retirement, it was said that if a principal could be molded, it would be Hines. Many administrators and teachers looked to him for leadership through the years. Hines was a kind man and spent countless hours at sporting and school events. Known for his witty personality, he would do anything for his students and faculty members.

Mike Lockert: Mike Lockert started his career in the Cheatham County School District in 1971. He taught at both Sycamore Junior High School and Cheatham County Central High School during his career. A beloved and well-respected agriculture teacher, Lockert taught for 31 years and served as the district’s vocational supervisor for eight years until his retirement in 2010. He also was a bus driver for 40 years and served as the CCCHS freshman girls basketball coach for several years. Lockert loved school, life and farming. He was gracious, kind, helpful, funny and respectful. Additionally, he was a great influence on every student that went through CCCHS and not just those enrolled in his agriculture classes. As the vocational director, he always kept the teachers and students forefront in his mind, making decisions that would lead to their success in life.

Cordell Majors: Cordell Majors started his career with the Cheatham County School District in 1959, serving as the principal of Fay Trice School until 1965. While principal, he also coached the boys and girls basketball teams. In 1965, he moved to Cheatham County Central High School, where he taught agriculture, ornamental horticulture and science. At CCCHS, he was the chairman of the Future Farmers of America and took great pride in seeing the success of his students in contests such as soil judging, parliamentary procedure, farming, landscaping and more. He retired from CCCHS in 1996. He also coached Little League baseball teams for many years in the community, teaching his players not only skills of the game, but also life skills.

Viva Lee Raymer: Viva Lee Raymer started her career in the Robertson County School District in 1941, where she taught for five years. In 1946, she joined the Cheatham County School District and taught at Pinnacle School until 1957. When East Cheatham Elementary School opened in 1957, she joined the school’s staff and taught there until retiring in 1980. Following her retirement, she was a substitute teacher for eight years. At an early age, she felt God’s calling to be a teacher. Those who knew Raymer learned to respect and love her because of her dedication, courage and genuine interest in them. Many of her students came to school starved for love, and she devoted her life and energy to be a positive influence in their lives. Raymer, in a letter she wrote before she passed away, said the 41 years she spent in the classroom were “well spent.”

Dr. Alvin Rose: Dr. Alvin Rose started his career in the Cheatham County School District in 1969, teaching history at Cheatham County Central High School. He taught for seven years at CCCHS and then served as the school’s assistant principal for one year. In 1976, he was named the CCCHS principal – a position he held for 13 years. In 1989, Dr. Rose was appointed as the district’s secondary education supervisor. He served in that position until his retirement in 2010. He always held Cheatham County to a very high standard when it came to education. Through the years, he served as a great mentor to his students and fellow colleagues. His organizational skills, knowledge, friendly attitude and great smile inspired everyone in the district. Dr. Rose left his mark in Cheatham County, and his influence will live on for generations to come.

Fay Shearon: Fay Shearon started her education career as a private kindergarten teacher. She joined the Cheatham County School District in 1962. At CCCHS, she was in her element as a senior English teacher and also taught Home Economics and speed-reading. She was the first golf coach at CCCHS, sharing her love for the sport with students and helping to grow the golf program into a success. After her retirement in 1991, she worked with homebound students. Throughout her career, many students as well as teachers looked to her for advice and wisdom on school and personal matters. Numerous students have stated their success in life is due to her encouragement, influence, and the relationships she built with them in class. In addition to being an extraordinary educator, she was involved in numerous events within the Cheatham County community.

Jimmy Stack: Jimmy Stack started his career with the Cheatham County School District in 1971, teaching at Ashland City Elementary School, Pleasant View Elementary School and Cheatham County Central High School. He primarily taught algebra at CCCHS and served as the Cubs football coach from 1986-1990, leading the team to two state playoff appearances. Stack was elected superintendent of schools in both 1992 and 1996, and he was the first appointed director of schools in 2000. During his tenure as superintendent, he oversaw the largest building program in the county's history as four schools were built and/or renovated. The cluster system was also developed during his tenure. Stack was a member of the Tennessee Organization of School Superintendents and was elected by his peers to serve on the TOSS Board of Directors until his retirement in 2001.

Carrie Street: Carrie Street, a native of Cheatham County, started her teaching career in 1926 at Harpeth Valley School in Dickson County. She then taught at Cheatham County community schools, Dog Creek and Chapmansboro. In the 1940s, she taught at Kingston Springs Elementary School, where she also served as principal for more than 20 years. She later taught and was the principal at Pegram Elementary School from 1962 until herretirement in May 1973. Miss Street, who never married, helped shaped the lives of many young people in South Cheatham County. She was known to run a tight school. Students, teachers and parents respected her ability to lead both Kingston Springs and Pegram schools. They knew things were in good hands under her stellar leadership.She inspired many young people and teachers to greater achievement and influenced all who had an opportunity to learn and work with her. She was also known to deliver food to students in need, board teachers in her home and even helped raise her two foster sons.

The Hall of Fame honors those individuals who have demonstrated measurable influence and made significant contributions to the growth and development of education in Cheatham County.

“The inaugural class of the Hall of Fame is the gold standard for educators,” said Cheatham County Director of Schools Dr. Cathy Beck. “Each individual member touched the lives of countless students and colleagues. We are who we are because of them. They helped form the foundation of this amazing district.”

A committee has been established to select the Hall of Fame class, and nominations for next year's class are being accepted through June 30, 2022.

Eligibility requirements for nominees include:

• Been retired from the CCSD a minimum of 5 years at the time of consideration.

• Have been employed for a minimum of 20years and must have distinguished themselves by demonstrating exceptional leadership, character and achievement during his/her tenure for the CCSD.

• Posthumous nominations will be accepted.

• Brief personal biography of nominee (dates of service and positions held during career).

• Brief narrative of significant educational contributions of the nominee.

• Nomination forms, with the requested information, are available below. For additional information, contact Communications Director Tim Adkins at [email protected] or 615-792-5664.